Accessible modification of a forklift 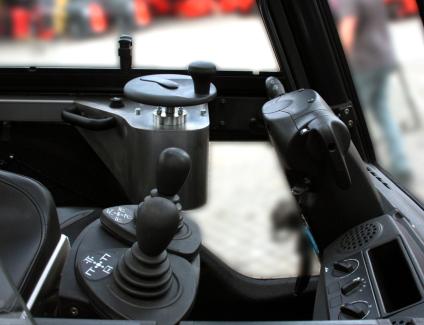 After a serious accident, a forklift driver suffered from severely limited mobility in his right arm and shoulder and neck area. The young man’s employer wanted to ensure that he could still work and therefore commissioned us to convert his forklift into an accessible vehicle. Wherever possible, existing components from the vehicle or from the client’s range of spare parts were to be used to complete the modification.

The steering wheel had to be removed and a smaller one placed in the cab door to the left of the driver. We were able to adjust how the joysticks on the right-hand side were operated using a variable armrest. In addition, the carriage had to cover at least the maximum control paths and angles of the joysticks and have a centred home/neutral position. The horn, which was previously found in the steering wheel, was integrated into the console. And to support the man’s arm, the armrest was ergonomically adjusted.

For the right-hand control console, we developed a support that can be moved lengthwise and crosswise. In order to prevent the man’s forearm from slipping sideways, we replaced the armrest with a supporting moulded pad. The steering wheel was moved from the standard steering console to the left-hand cab door to enable the steering to now be operated comfortably with the left arm.

With this modification, the young man is now able to move his whole arm including the support from his shoulder and adjust the joystick control levers without using his fingers. He can also carry out steering movements with ease despite his restricted mobility.